Phil Gregory is a well-known tour leader, working for Field Guides Inc. and Sicklebill Safaris, and one of Australia’s foremost birders. He is also one of the most experienced guides for New Guinea, with many tours led there since 1998. Phil is the author of Birds of New Guinea, Winner of the 2017 Whitley Award for the BEST BOOK in the category of FIELD GUIDE.

When did you began to travel to the New Guinea region for birding purposes, and how did you develop your knowledge about that avifauna?

We flew over the great island in 1977 after a trip to Queensland, and I was intrigued by the amount of forest below and very keen to visit, but I was not to actually get there until 1991, when my wife and I took posts as teachers at the International School at Tabubil in the remote Western Province. The avifauna at this time there was quite poorly known with just a couple of quick surveys back when the copper and gold mine at Ok Tedi was being set up, so there was much scope for discovery.

Looking back, it is amazing that what we now take for granted was just so hard or unknown then. I recall a beautiful whistled call heard at dusk near our house, which I was only able to identify a couple of years later as Hook-billed Kingfisher, when I finally got to see the highly elusive bird! Another bizarre one was a very loud series of notes from limestone karst forest that we had no idea about, suspecting a robin of some sort and being astonished to find the perpetrator was a large black terrestrial bird that was actually the rare and almost unknown Greater Melampitta, still a great prize even now.

I travelled about as much as I could, getting to what was then Irian Jaya in 1994 and to most parts of PNG over the time I was there from 1991 to 1998. One piece of advice to travelers is to make sure you always have local guides, it is easy to get into trouble if you are found trespassing on someone’s land—and all land is owned in PNG—, but as long as you have permission there should be no issues.

I remember one of my early visits to the still volatile Tari area in what was then Southern Highlands, staying at the lovely Ambua Lodge, which at that time did not cater for birders at all. A tribal war had broken out with the group near Mendi, blockading the Tari valley for some 3 months until the locals had had enough and decided to sort it out. They all got armed and painted up, and we met hundreds of warriors all equipped with spears, knives, machetes and bows and arrows loading up into trucks and vans to go to war. This was a great social occasion and everyone was in very high spirits, eager to talk to us and tell us about what was going on. Sadly the Lodge could—quite rightly—not be responsible for us in this situation, so we had to be evacuated next morning at 0400h and were dropped in Mt Hagen to shift for ourselves. The conflict led to a school being burned down, some half dozen people killed and the road reopening, all quite normal in the PNG context even today. We saw many great birds including the wonderful Ribbon-tailed Astrapia and King of Saxony, two of my favourites, Chestnut Forest-Rail was at this time still very tame here, and we were well aware that the local Log-runners were quite different to the Australian version, but my client at the time was one of the world’s top listers and he was upset that the tribal fight meant we missed Blue Bird of Paradise. Definitely time to complete my autobiography of birding tales…

A source of growing frustration once the new century had begun was the long out-of-date taxonomy of both New Guinea and Australia, and I devised my checklists for both countries so I and my clients at least had an up-to-date source, and this led eventually to the Lynx Field Guide to New Guinea.

What aspects would you highlight to readers about your Birds of New Guinea?

As a field guide, the book is succinct and focused on field characters. Having the maps, plates and text all on the same page is very helpful, though we found the map task was far harder than anticipated and ended up doing a complete overhaul for HBW as well as for the field guide. We also chose to make the book inclusive of the entire New Guinea region, so the Bismarck Archipelago is included, as is Bougainville (which currently remains part of PNG pending an independence referendum due sometime).

We were also fortunate to have such a talented team of designers and artists available, and a lot of plates were added to the original HBW set, plus various revisions. I was well impressed when I requested an illustration of a female Painted Tiger Parrot and the illustration was completed overnight! I also personally hate vagrants cluttering the main text and was pleased when it was agreed to have them as a separate section at the back. It was great that the title won a Gold Whitley Award in Australia for Best Field Guide in 2017.

Considering the present taxonomic revolution, do you think the inclusion of subspecies on the plates, when these are distinctive, will keep your guide ‘updated’ for a longer time when considering possible future splits?

These days it seems advisable to depict as many distinctive taxa as possible as taxonomy is in such flux regardless of who you follow. We have tried to flag potential future splits and highlight the possibilities, also acknowledging that we need to review the subspecies to bring them into line with the excellent job done by Pratt and Beehler in reducing the poorly marked taxa. 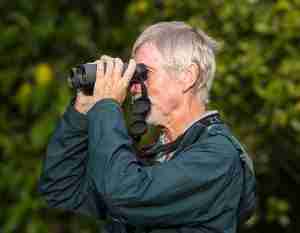 What were the main challenges you had to confront when working on the book?

Time and taxonomy, working full time as guide and tour manager for Field Guides and Sicklebill Safaris meant it was very hard to get blocks of time to write species accounts, and this is not something you can do just on odd days. I was lucky to have the support of the excellent Lynx editorial team headed by Arnau Bonan, who were very responsive to my numerous queries and picked up many small errors, and David Christie was a marvelous, knowledgeable and helpful editor. Agreeing taxonomy was also hard, but I soon adopted a pragmatic approach in that these things are not set in stone and can always be revised in the light of new information. This is a source of some frustration with other checklists that seem to be forever waiting for “research” to confirm pretty obvious splits; at this rate some of us won’t be alive to see the outcomes!

Which Islands or region would you recommend to birders that are heading to New Guinea for the first time? And for more experienced birders, which areas would you suggest and why?

For first timers: take a trip that the covers the major habitats—the lowlands, hills and montane areas; there is a well-established circuit now and various companies offer trips. Names to conjure include Varirata, Kiunga, Kumul Lodge and Rondon Ridge at Mt Hagen, Ambua and Makara near Tari if available, and of course Walindi on New Britain. New Guinea has a reputation for being physically challenging (it can be!), but many trips are actually quite straightforward for anyone moderately fit, and some tours cater for the older and/or less mobile, too. More challenging perhaps are the logistics, as it can be very hard to confirm bookings, and the Air Niugini flight schedules are notoriously rubbery, whilst the Highlands remains a volatile region and your guides will keep a close tab on what is going on at any one time. Expect the Unexpected.

For those who have covered the basics, then more demanding trips to the Huon Peninsula, Adelbert Mts, Manus and New Ireland and Bougainville can be arranged, whilst West Papua has greatly improved and has come onto the radar now. I personally am very keen to get to Tagula Island and Rossel Island in far SE PNG, one of the last gaps in my personal coverage and hopefully to be expedited in September 2020.

One thought on “Want to travel to New Guinea? Come with us off the beaten path with Phil Gregory”