Glenn Hoye is the photographer with the most images published in the recently released Volume 9, Bats, of the Handbook of the Mammals of the World. He is an ecological consultant who has been running his own company, Fly By Night Bat Surveys, since 1992, working in the environmental field as a bat expert. He’s also a specialist in bat photography, an activity in which he has developed superb skills and specialized techniques to capture impressive images of these nocturnal animals in flight as well as inside the caves where they live. Glenn kindly took the time to answer our questions and give us a close-up view of what goes on behind the camera.

From how long have you been photographing bats? How did you begin with these flying mammals?

I first started photographing bats in the early 1980s. I had obtained a permit to band bats and was getting to know the various species in eastern Australia in an area north of Sydney. Photography became part of my investigation into the life habits and behaviour of this little known group of mammals. At that time, relatively few people were researching Australian bats. Some of these early attempts at bat photography appeared in the first comprehensive book on Australian mammals published in 1983. After studying many of the local species I began to seek out and photograph bats, as well as other fauna, during trips to northern Australia. My wife Margaret and I would pack the car and travel north with three young children and camp in natural areas. During these trips I became familiar with the range of bat species present in tropical Australia. Additional species were observed and photographed while participating in expeditions to central and northern Australia during the early 1990s. From 1992 I ran a small company consulting on bat conservation and management and continued photographing bats during fieldwork at sites throughout eastern Australia. During the past decade I have been photographing bats during targeted trips to areas of Australasia. 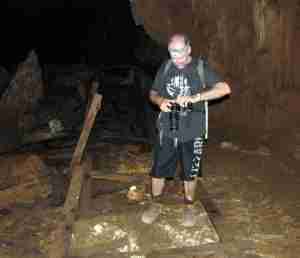 Let us know which species have been more difficult for you because the places where they live and because of their rarity.

For the past decade I have been travelling to the various islands in Oceania and Australasia to see and photograph bats. Some bat species in the region are restricted to single islands or small island groups. This is particularly the case for many small species of flying foxes. Many of the rarer species are only known to science from a handful of records and a lot of luck is required to encounter them during a relatively brief visit to their island homes. The travel options to many islands are limited and you have to carry everything you need. Due to weight restrictions you are also limited in the equipment that can be taken. Because photography is only one of my priorities I have to minimise the weight of photographic equipment. Access to sites can also be difficult in Melanesia and Oceania; which usually requires negotiation with land owners.

A photographer of bats needs to use special techniques and equipment when comparing with wildlife photography by day. Let us know about it.

Photographing bats has its own challenges compared with other fauna such as birds that are mostly diurnal. While some species such as the large flying-foxes can be photographed at their roosts during the day, most species are not readily encountered. For cave roosting species I try to get at least some pictures of them in their roosts. For the majority of the species however, individuals have to be captured in order for them to be photographed. This is also the case for many other small mammals such as rodents and small terrestrial insectivores. Artificial lighting from electronic flashes and other light sources are often used to illuminate the bats. Bats can be photographed in flight using infrared beams and other triggers. Because bats fly quickly, short duration flash is required to capture them in flight and reduce blurring.

Digital cameras have made a great difference while photographing subjects in remote areas. Prior to their development images were taken on transparencies. This meant that you could not be sure if the images were good until you returned home, posted the slides off for processing and received them a few weeks later. With digital cameras you now can review shots taken immediately and retake images if they are not satisfactory. The cost of film was also prohibitive so you normally would not take the number of images that is now possible with digital cameras. It also entailed carrying large quantities of film into hot humid areas without refrigeration.

Documenting the different bat species is nowadays something useful for conservation purposes. We would be interested to know what do you think what’s the impact of your work regarding this. 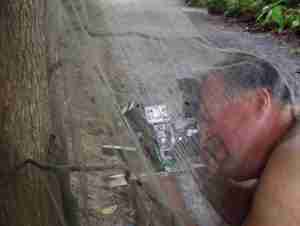 Just over a decade ago I went to Christmas Island to see and photograph the Christmas Island Pipistrelle. Its decline had been reasonably well documented and when I visited the island in 2007 it was only present in one small section of the island and totalled less than fifty individuals. It was roosting under the bark of dead rainforest trees and most of the trees being monitored had fallen. I was keen to get photographs of the species while it was still possible and I also wanted to do something positive during my visit to assist in recovery attempts. I offered to radio track some individuals to locate additional roosts to monitor as well as provide a report recommending actions that may help halt its decline. While this species subsequently went extinct, existing photographs at least give us a reminder of what we have lost.

Unfortunately, a wave of extinctions of bats and other fauna are imminent in Australasia as well as elsewhere on the planet due to over clearing of native forest and the widespread effects of climate change. A number of bat species in the region are present only on isolated islands or groups of small islands. Unsustainable forestry on many islands has decimated native forest and reduced habitat for endemic bats. Harvesting of bats for bush meat by increasing human populations has impacted bat numbers within close proximity to villages. Some of these species could slide into extinction without even a photograph of them existing. Many species have been poorly photographed in the past, or in some cases, no images exist. For the past decade I have attempted to get to remote areas to photograph and document as many species as possible.

A more positive aspect of my attempts to photograph as many bats in the region as possible is to provide images of this fascinating group to encourage young people of the region to pursue research and conservation efforts into the future. Apart from portraits of the various species I also take diagnostic shots that can be used in keys to differentiate the various species and allow easier identification.